If you've been presenting or recording presentations about Azure, you may have tried to hide keys, subscription IDs and other secrets from your audience.  It's not that easy, especially when these secrets move along the tiles in the Azure portal.  I finally found a couple of extensions to help obfuscate secrets while presenting to an audience or recording a video.

Code obfuscation in Visual Studio
Viasfora is a free extension for Visual Studio 2012-2017 that offer a series of text editing improvements and one of them is the option to obfuscate code. Once installed, you open the Visual Studio Options menu and locate the Text Hiding section of the Viasfora settings.  Using a RegEx expression, Viasfora with look for a pattern in your code and hide that code.  I wanted to quickly add and remove the pattern so I came up with a RegEx expression that will look for this pattern: *_hidden*=.  This way, I can simply append any variable name with _hidden and voilà! Here's the expression: (?:_hidden\w*\s*=\s*")(.*)(?:") 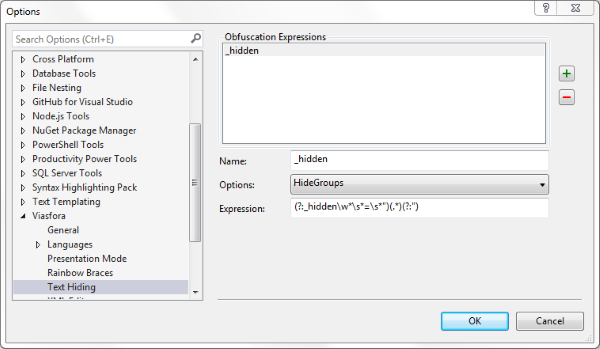 Here's the code.  Notice the first two variables ends up with _hidden.

Selecting the View\Obfuscate Text menu will obfuscate the values.

However, you still need to be careful because if you hover the mouse on a variable, the value will be displayed in the tooltip.

Granted I could place these values in the config file or in a class that I won't show but none the less, this is a cool extension.

Text obfuscation in Chrome
Recording a video about an Azure service may expose some sensitive data like your subscription ID.  I once started blurring the ID in Camtasia but since the blades are moving horizontally, it was just impossible to do so I gave up until I saw Samir Bellouti presenting at the Global Azure Bootcamp.  All his secrets in the portal were hidden and he told me that he was using a Chrome extension.  I can't remember which one he was using exactly but I found Blur It Out in the Chrome Web Store.

Once installed, you simply click on the Blur It Out toolbar button and add the text you want to obfuscate (Note that I've blurred the ID using SnagIt in the next screenshot) 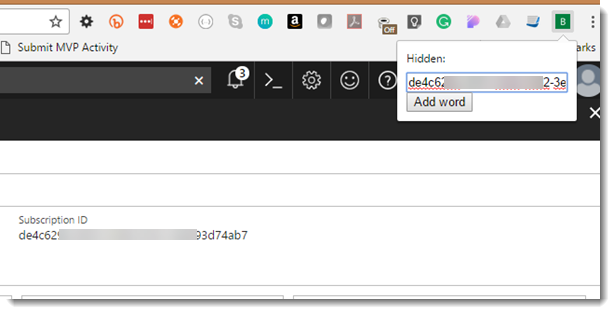 The text is now hidden in any page you browse.

Still, be careful because if you hover the mouse over the obfuscated text, it will be revealed!

That's it!  If you have some tricks to hide secrets while presenting, I'd be more than happy to hear from you.